This morning I found a scrapbook that appears to have belonged to my father, Stewart Taylor.  Inside, I discovered the following photograph: 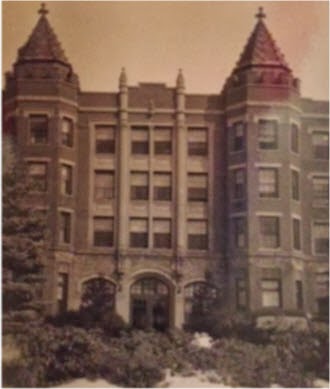 There was no identification on the photograph, but other nearby photos in the album showed young men and women carrying books and strolling along what seems to be a college campus.

Many years ago--probably in the late 1930s--my father attended Springfield College in Springfield, Massachusetts, and I wondered if this was a photograph from his days spent there. After much searching in the Springfield College Digital Collections, I found the following photograph of Alumni Hall.  It was taken many years after my father’s attendance, but it appears to be the same building. The unusual turrets helped me identify it.

The following is another photo from my dad's scrapbook--this one actually has writing on the back: 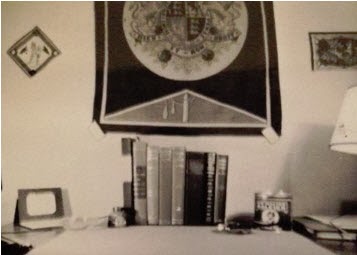 I am impressed at how neat the desk was and that the wall was decorated. Note the can of Sir Walter Raleigh tobacco and the pipe. Like many men in his generation, my father was a smoker, although his taste changed to cigarettes later in life.

The banner on the wall appears to be the Royal Arms of Great Britain, an interesting choice.  I wish I could read the titles of the books.

There is so much we don't know about our ancestors. If we are fortunate, they left us photographs, diaries, scrapbooks and letters. Unfortunately, there are many people who have been left no clues about their ancestors--not even their names.  I love learning about the people who came before me and want to help others learn about their heritage.

Posted by The Art of Genealogy at 6:17 PM