Posted by The Art of Genealogy at 6:24 AM No comments:

THE STEAMER TRUNK THAT RODE ON THE LUSITANIA

William B. Williams and his wife, Jane Owen, were my great grandparents.  I never met William or Jane, but my mother adored them.  They came from Wales in the 1880s and settled in Utica, New York, along with many other Welsh people.

I recently acquired from my brother the trunk that William had used during his travel to and from Wales. 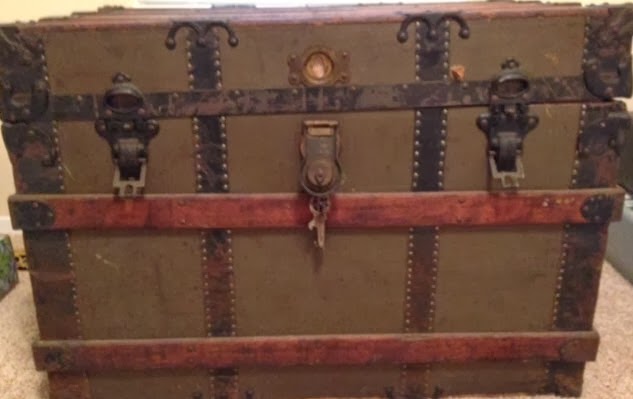 William’s initials are on the side of the trunk: 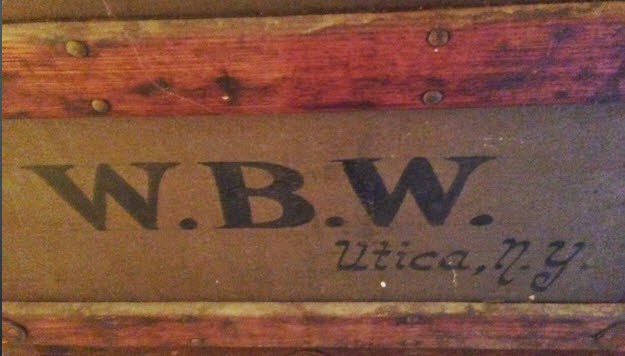 After doing a little research, I learned that the company name “Henry Likely & Co.” was used from the late 1870s until 1925. (1)  Thus, it is possible that William and Jane bought this trunk soon after their arrival in New York in the 1880s.

What is fascinating about this trunk is the label on the top: 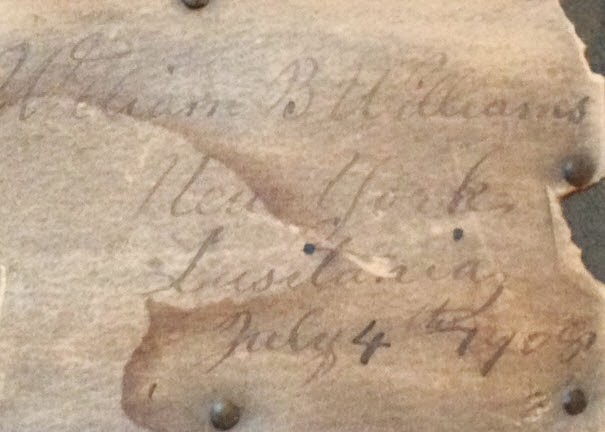 Fortunately for them, they rode the Lusitania before it was torpedoed and sunk in 1915. (http://en.wikipedia.org/wiki/RMS_Lusitania).  They travelled on this ocean liner just one year after its launch in 1907.

I then went to the Ellis Island website (http://www.ellisisland.org) and searched for arrivals on the Lusitania in 1908. I found an arrival on July 10, 1908 from Liverpool, England, and, sure enough, William and Jane Williams were on board. They were listed as married U.S. citizens with their last place of residence as Utica, New York. (2 and 3) According to the Ellis Island website, William was age 53 (2) and Jane was 4…  (3)  I am not sure why Jane’s exact age was not completed.

Since my great grandparents had lived in Utica for over twenty years in 1908, they apparently went back to Wales to visit. Liverpool is not far from Holyhead, Wales, where they were born. (A MapQuest search shows that the two cities are approximately two hours apart.) I wonder if there was a family event or if they just wanted to see the old country again. They had lost a son, Robert, to illness in 1906. Another son, William, was killed by a train in 1907.

Who was watching their three daughters in Utica (Jane, Winifred and Isabel), who weren’t quite old enough to stay alone?  Perhaps William’s mother, also named Jane, who was living in Utica at the time, kept an eye on the girls. Or perhaps one of William’s siblings who also lived in Utica.

There was another couple on the ship named Robert and Elizabeth Jones, who were also from Utica. (4 and 5) Did my great grandparents know them?

I have two "Holyhead, Wales" vases that have been in my family for years. I wonder if Jane and William bought these as souvenirs from their trip? There is no discernible manufacturer name on the vases, and I have not been able to find similar vases on the Internet that might give me an approximate date of their manufacture. 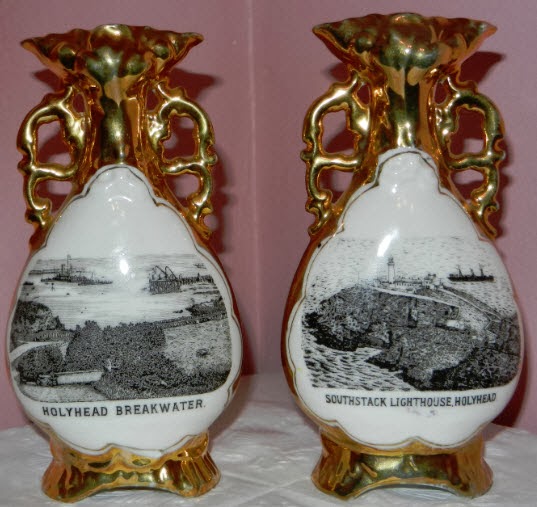 WHY I LOVE MOCAVO: Langdon Scripture 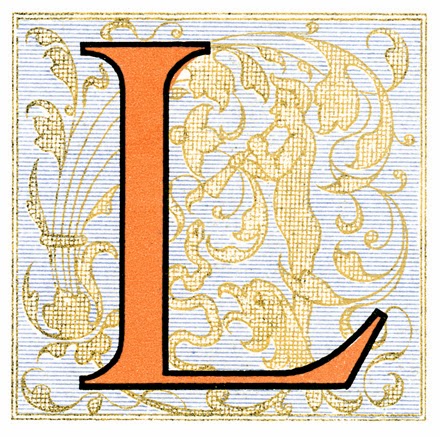 angdon Wilson SCRIPTURE was my 1st cousin 4x removed. The other night I was experimenting with Mocavo (www.mocavo.com) and found 9 hits for Langdon Scripture.  Since Langdon’s name is unusual, the number of hits was quite manageable. If you are searching for a common name, you will get more results; however, you can add keywords to limit the results.   I love Google, but Mocavo is designed to focus on genealogy-related material. Mocavo will save you time, a precious commodity.

REASON TO LOVE MOCAVO NO. 1

Langdon was born in Michigan but died in South Dakota in 1919. One of the Mocavo hits (http://files.usgwarchives.net/sd/day/land/day-s.txt) was part of the Bureau of Land Management database for Montana, North Dakota and South Dakota.  There are two land patent listings for Langdon W. Scripture in this database, one for 1888 and the other for 1889.The following information is given: meridian, township, range, section, acreage, type and date. (1)

I now need to submit Form 84 to the National Archives in order to obtain a copy of the Land Entry files.

REASON TO LOVE MOCAVO NO. 2

Another search result I got on Mocavo was in What I Remember of the Great Rebellion. In this case I was shown a snippet that mentioned Langdon Scripture, a private in Company B, with a right thigh, flesh wound. (2) I was unable to see the full page because I have not yet become a member of Mocavo Gold. I therefore searched for the title of the book on Google and found the book for free on archive.org.  Here, I discovered that Langdon Scripture had been wounded while a part of the 20th Michigan Regiment at North Anna during the Civil War. (3) I knew that Langdon served in the Civil War, but I did not know he was in that particular battle or that he was wounded. 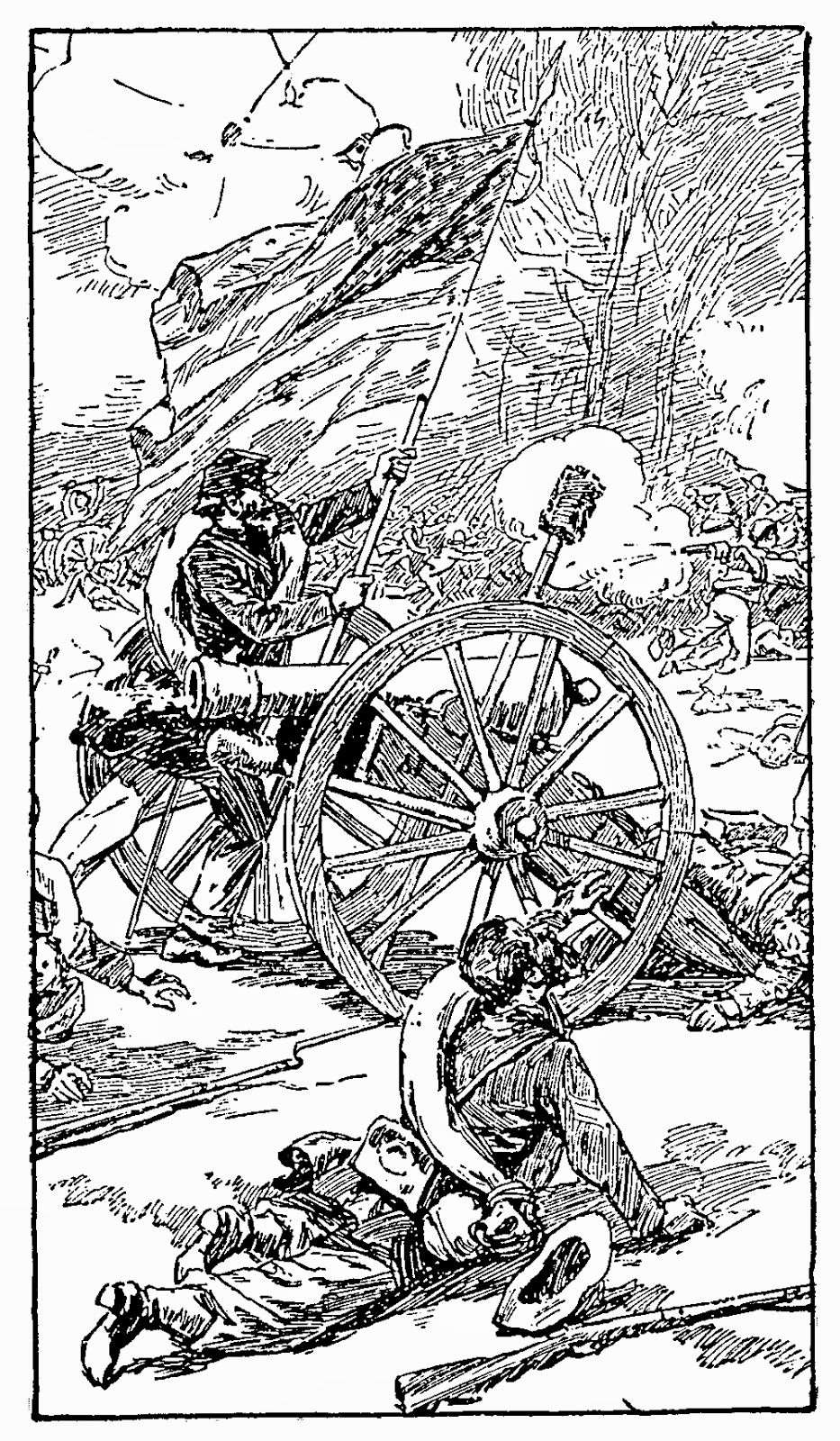 REASON TO LOVE MOCAVO NO. 3

And yet another worthwhile Mocavo hit was the appearance of Langdon Scripture in List of Pensioners on the Roll January 1, 1883 (Volume 4). (4) Again, I got a snippet and, again, I found the book for free on archive.org.  Here, I found the following information: certificate no. of pension, name of petitioner, post office address, cause for which pensioned and monthly rate. There was also a category entitled “Date of Original Allowance,” but the page with Langdon’s information had not been fully copied.  The certificate number was 154,515, and that is handy information if I want to obtain more information. (5)

REASON TO LOVE MOCAVO NO. 4

One of the hits I got on Mocavo was a record of Langdon’s marriage. This time, Mocavo allowed me to click through to the link at LiveGenMI. Here I discovered that Langdon married Louisa E. Conrad in 1894. This site listed the name of the bride or groom, the spouse, volume, page and year.  I can now use this information to investigate further records. As a bonus, two other Scriptures were listed. (6)

There were a few other hits, but they were either not on point or I had seen them before. I now have to decide if I want to join Mocavo Gold. I was very pleased with the free results I got on Mocavo, but it did take more time to hunt down the books referred to in the search results. If I were a member, I would have been able to quickly navigate to the book listed. I am always looking for ways to save time. The $60 annual fee may well be a good investment. There are other features offered to Gold members (see http://www.mocavo.com/gold). Check out Mocavo and let me know what you think.

Posted by The Art of Genealogy at 6:48 PM No comments:

Email ThisBlogThis!Share to TwitterShare to FacebookShare to Pinterest
Labels: Mocavo


Posted by The Art of Genealogy at 6:20 AM No comments:


Posted by The Art of Genealogy at 6:31 AM No comments: 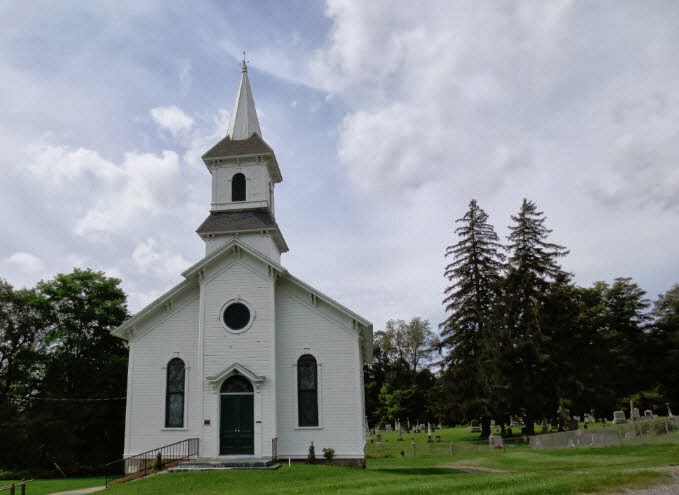 The cemetery is in the back and alongside the beautiful, yet simple white church.  It was built in 1876 by Welsh immigrants. It used to be Congregational, but now is nondenominational.  Services are conducted on Sundays during the summer. Local ministers perform the services on a rotational basis. Weddings are also held there. 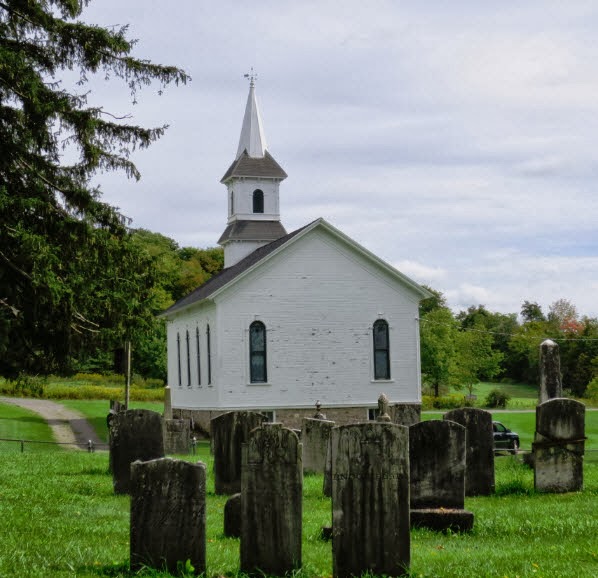 There are a number of websites that discuss the church.  Here is a listing of persons buried in the churchyard: http://www.rootsweb.ancestry.com/~nyccazen/Cemeteries/Nelson/WelshChurchCem.html. This site gives birth date, death date, age at death, spousal relationship (if applicable) and the condition of the stone.  Please note that the list is not comprehensive.

I do not know if I have an ancestor in this cemetery but it is very possible. I have a number of Welsh ancestors who lived in Central New York, and my mom used to go there when she was alive.  It is fun to stroll through the churchyard and read the stones—you will see the same names over and over—Griffiths, Williams, Jones, Owen, Roberts, Davis, Evans. 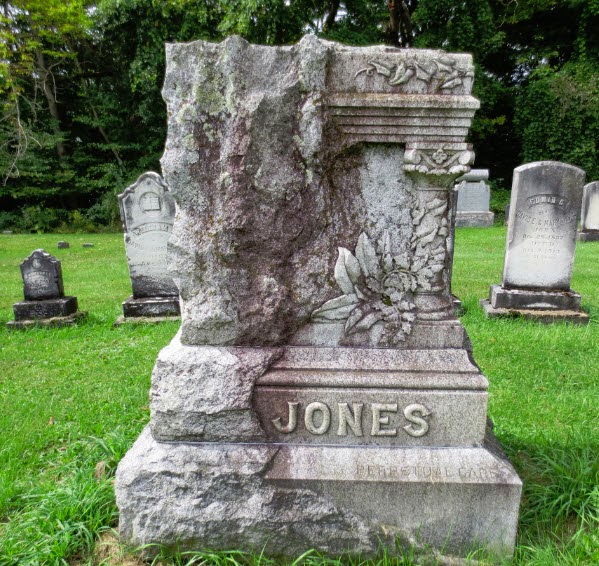 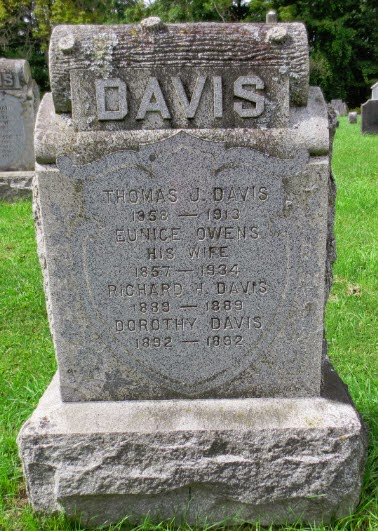 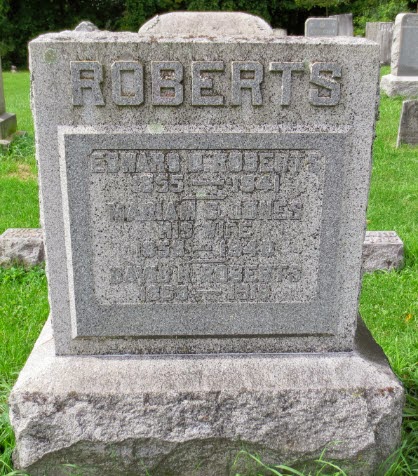 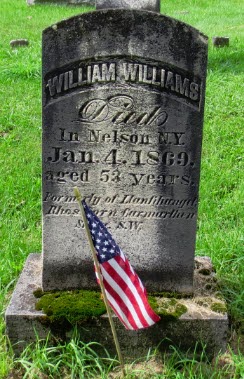 The church is really quite fabulous, and worth visiting even if you have no Welsh ancestors in your tree. 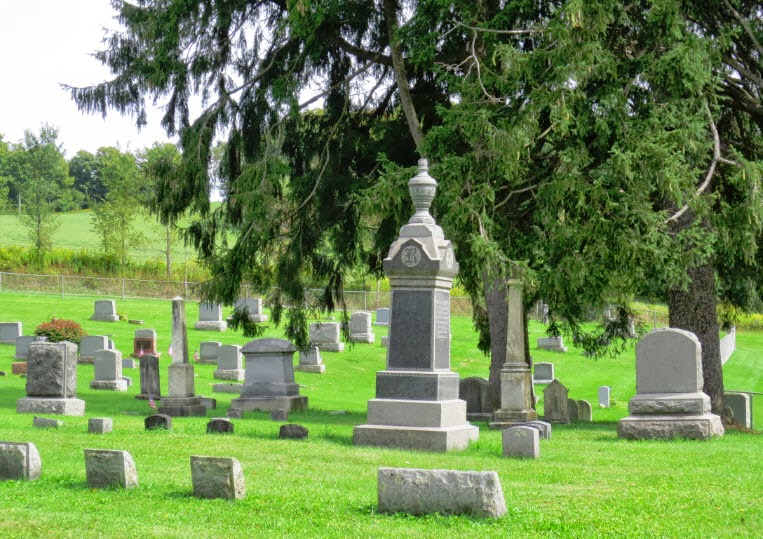 Posted by The Art of Genealogy at 5:29 PM No comments: 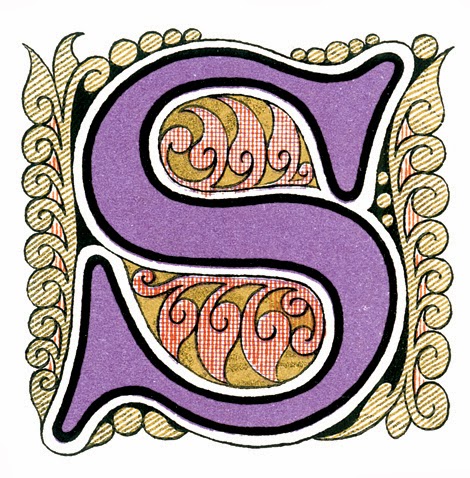 ince many of my ancestors lived in Oneida County, New York, I was thrilled to be there a few weeks ago. First, I dropped off several vital record requests at the City of Utica Vital Records Office (http://www.cityofutica.com/VitalStatistics/Genealogical+Services.htm). While I was waiting for the certificates to be prepared, I went to the nearby Oneida County Historical Society (http://www.oneidacountyhistory.org) located at 1608 Genesee Street, Utica, New York.  There was free parking in the back of the building, and I located the research library in the basement. I was greeted by a friendly worker who gave me a tour of the resources. There were several shelves of books, photographs, manuscripts, periodicals, computers, filing cabinets with clipping files and tables to do your research. Non-members of the society need to pay a nominal fee for use of the library.

One of the best discoveries at this library was the amazingly complete city directory collection for Utica. I started with the oldest city directories, which were very small compared to the later years. Using my iPad, I took pictures of relevant pages for the ancestors I have who I believe lived in the years covered by the books.  Some of the city directories were in bad shape but they were readable.  I now plan to type up and put in chart form (name, address, date, occupation, etc.) all the information I photographed. Hopefully, this will help me determine the time when my ancestors first arrived in Utica and when they were gone.  It may also help me narrow down my choices for some of the common names I am searching, such as Park, Marsh and Williams. 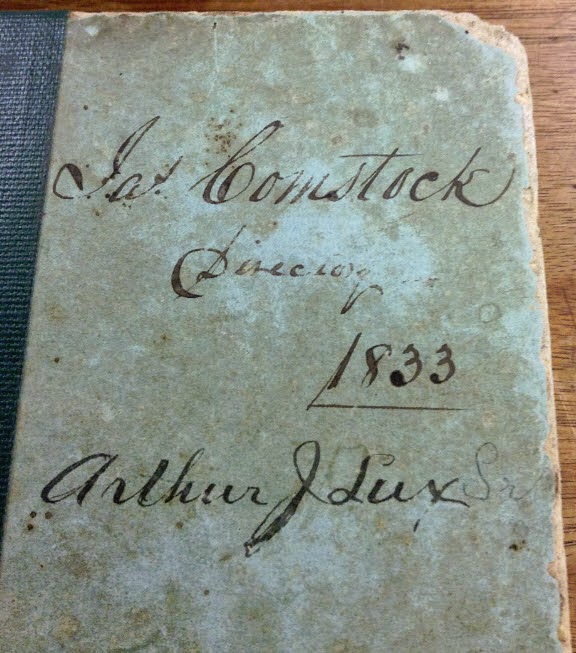 While I was looking through the city directories a volunteer arrived who was extremely helpful.  After a discussion of the people I am researching, she brought me several folders from the clippings files.  She also brought me precious old census books for Oneida County. I snapped pictures of what I could. I regret that I didn’t have more time.

I then browsed the stacks and perused:


Afterwards, I went upstairs and was delighted to find that they have a bookstore filled with all things Oneida County, New York and more. 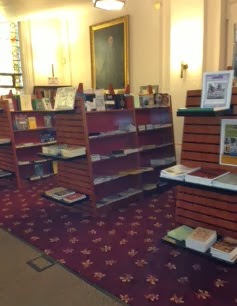 I purchased a few items, of course, and then explored the adjoining museum. 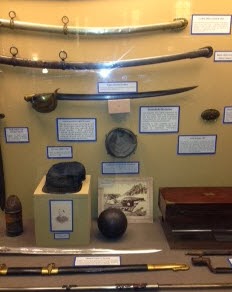 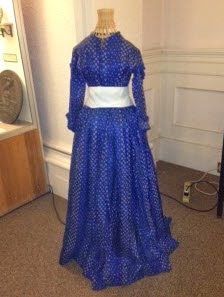 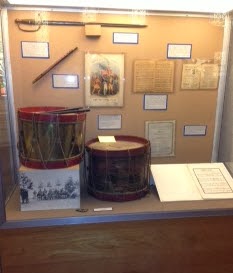 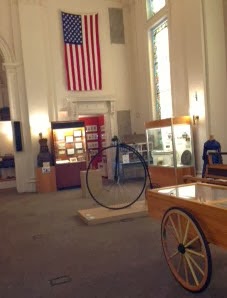 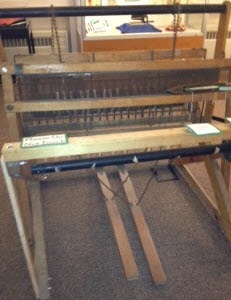 As you can see, the Oneida County Historical Society has much to offer anyone interested in genealogy and/or history. Here is a link to their Facebook page: (https://www.facebook.com/pages/Oneida-County-Historical-Society/57747637498).

Posted by The Art of Genealogy at 11:42 AM No comments:


Posted by The Art of Genealogy at 6:18 AM No comments: