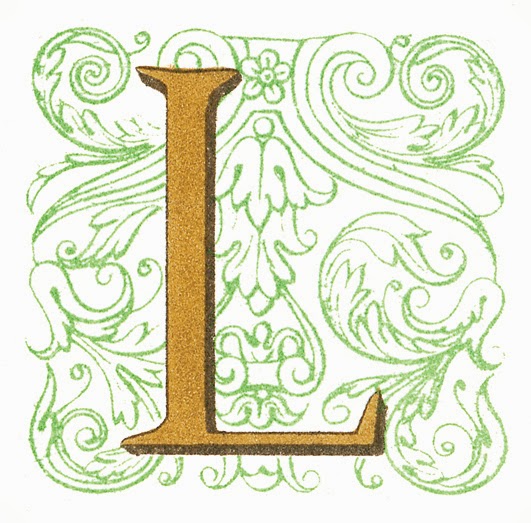 ast week I discovered my mother’s school autograph book from 1933.

First, I learned that she was the class secretary. (Ironically, she spent most of her life working as a secretary/office manager.) Since she was born in 1923, she would have been around 10 and probably in 4th or 5th grade.

The autograph book contained brief messages and signatures by friends and family. Fortunately, many of the notes were dated.  On July 9, 1933, a number of relatives signed the book. Perhaps there was a family event, and my mother took the opportunity to gather signatures. I can almost visualize her walking around with her autograph book asking people for signatures.

That day the following people wrote a note to my mom:

Aunt Isabel – I believe that this would have been Isabel CUTLER Evans, my grand aunt. 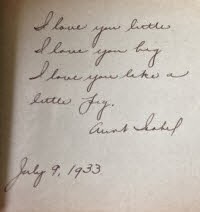 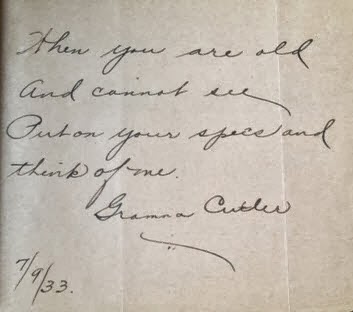 Uncle Wayne – This person is a mystery. He signed the book on the same day as the other Cutler relatives, so I assume he is from that side of the family. However, I do not have a Wayne Cutler in my tree. I have a Wayne Hills, husband to my grand aunt, Dora Agnes TAYLOR Hills, who would have been living at that time. I have a Wayne SPAULDING, but he was a cousin. It is conceivable that someone who was a cousin would refer to himself as an uncle. Perhaps Wayne was a nickname or maybe this Wayne is a person as yet undiscovered. 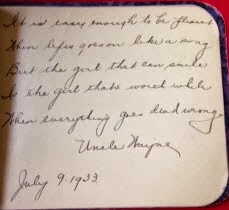 On June 22, 1933, there was a signature by Aunt Belle. This was no doubt the signature of my grand aunt, Isabel WILLIAMS Hamlin. “Aunt Belle” was the way my mom used to refer to her. 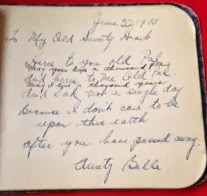 There were also two signatures (in what appears to be the same handwriting) by my Welsh great grandparents, William WILLIAMS and Jane OWEN Williams.  They did not write messages, and I believe that might be because English was not their native language. I think William may have written Jane's signature, as I don't believe she ever abandoned her Welsh language.

Although they were somewhat corny and traditional, I loved reading the messages written in this book. If my mother only knew that her autograph book would be a genealogical treasure almost 100 years later.


Posted by The Art of Genealogy at 6:10 AM No comments:

I had the pleasure of attending the recent New York State Family History Conference (www.nysfhc.org) in Liverpool, New York. Registrants had the option of choosing one of two preconference choices: a day of research at the Onondaga County Public Library (http://www.onlib.org/web/lh) or a guided tour of the Syracuse area. Since I am from the Syracuse area, I chose the library option. 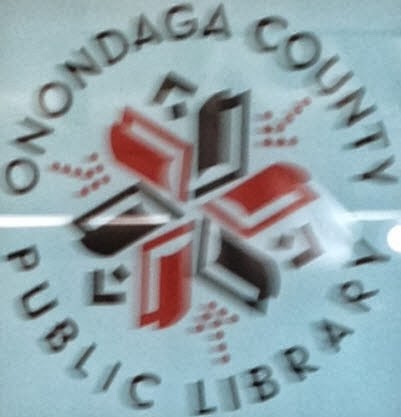 The Onondaga County Public Library (“OCPL”) has a fabulous collection of history and genealogy material for not only New York but also for New England, the Mid-Atlantic states, the South and the Midwest.  Non resident OCPL cards may be obtained at the library service desk on the first floor.  I filled out a short form and was issued a library card that is good for three years.

I started my research with the New York Vital Records Index, which was available on microfiche. First, I looked in a Vital Index binder and found the microfiche number, and then I asked a librarian to supply me with the fiche. I was allowed three microfiche at a time and my library card was held as collateral.   My goal was to verify the death date and location for some of my Taylor and Scripture ancestors. With this information I can more easily order death certificates. I had a 50% success rate. Not all towns complied immediately with the state records laws, so the absence of some of the death records is not surprising.

My second project was to explore my Burdick line. I located a book entitled Routes to Roots: the Burdick Family Chronology by Frank P. Mueller. This book was very helpful, and I photographed key pages with my mini iPad. If you wanted photocopies, the library staff would copy them for you for a nominal fee. There were at least three other books on the genealogy of the Burdick family, but time was an issue so I made a note for future investigation of those sources.

I spent an enjoyable hour browsing the extensive collection of genealogical and historical periodicals, such as:

I also spent time exploring various books on people who have served in various wars, such as:


In these books I found several references to my Beall, Brashear, Magruder and Bowie lines.

There was much, much more at the OCPL such as historical maps, telephone books, city directories, manuscript collections, historical newspapers, clipping files, census records (state and federal) and cemetery records.

Check out their online catalog (https://catalog.onlib.org/Mobile/Search) and make a list of resources you would like to consult. (Some material might need to be ordered in advance so it can be retrieved in time for your arrival.) Then, if you are in Central New York, spend a day there and discover all that this wonderful library has to offer.

Posted by The Art of Genealogy at 9:46 PM No comments:

WORDLESS WEDNESDAY: What's in the Basket?

I found the following photograph in an album I inherited from Winifred WILLIAMS Boyser, my grand aunt. To the left of the man in front of the car is a basket. This could be a picnic basket. However, the people in the photograph are dressed up--the men are wearing suits.  Perhaps people "dolled up" for picnics more than they do nowadays. The car looks like it is parked in the country. The location would have been in Oneida County, New York, and the time period was the first half of the 1900s.

I am pretty sure that the man on top of the car is Earl Hamlin, the husband of Isabel WILLIAMS Hamlin, my grand aunt.  Supposedly, Earl always parted his hair in the center. The man standing in front of the car is probably Frederick Boyser, the husband of Winifred WILLIAMS Boyser. The two women at the back of the car are most likely my two aunts, Winifred and Isabel.

In retrospect, I believe this was a staged photograph, and the car is a prop used by the photographer. 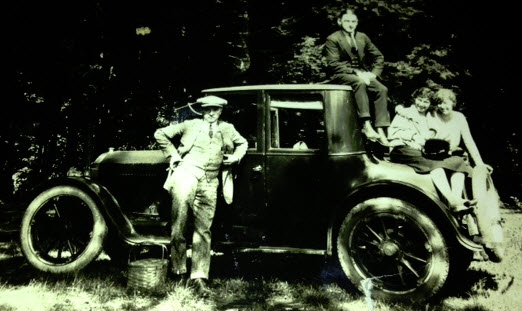 Posted by The Art of Genealogy at 7:12 AM No comments:

I found the following photographs of ladies wearing hats in one of the scrapbooks I inherited from Winifred WILLIAMS Boyser, my grand aunt. I believe that the photographs were taken early in the 1900s. I am not positive about the identity of the women, but I can give you my guesses:


Posted by The Art of Genealogy at 6:29 AM No comments:

In the 1840 U.S. Census, Hiram was living in York, Washtenaw, Michigan. (4) In the 1850 U.S. Census, Hiram is shown with his wife, Margaret, and children Maria, Langdon and Mary, as well as his mother-in-law, Sophia Speer. His occupation is farmer.(5)

Hiram died on 27 Jul 1851 at the age of 44 and is buried in York Cemetery in Milan, Michigan.  (6) His son, Langdon Scripture, would fight in the Civil War for the 20th Michigan Infantry.(7)

Posted by The Art of Genealogy at 12:04 PM No comments:

I found these photographs in an album that was formerly in the home of my grand aunt, Winifred WILLIAMS Boyser (1898-1971), who lived in Utica, New York.  I think the dog may have belonged to Winifred's sister, Isabel WILLIAMS Hamlin (1894-1966), also my grand aunt. This gives new meaning to the phrase "hood ornament." 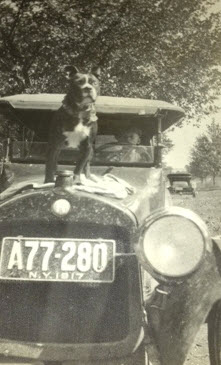 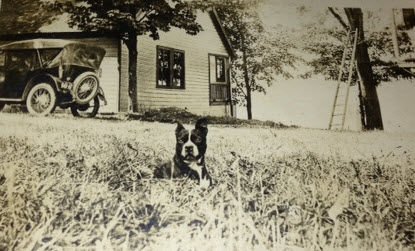 Posted by The Art of Genealogy at 6:19 PM No comments:

Geneameme was the brainstorm of Jill Ball at Geniaus (http://geniaus.blogspot.com/2013/08/the-bloggers-geneameme.html) in honor of Family History Month in Australia.  Here is my response:

The Art of Genealogy (www.theartofgenealogy.com)

I received an e-mail from a Jim Bowie descendant in response to my post entitled “The Search for Jim Bowie” (www. http://www.theartofgenealogy.com/2012/11/the-search-for-jim-bowie.html). He had a fascinating website (http://www.jamesbowiefmc.com) where I learned more about Bowie and his family.

I started blogging as a way of preserving and communicating my research with family and friends. Lisa Louise Cooke inspired me to blog with her podcasts about blogging.

It was a process of trial and error. I wanted a domain name that was available on Godaddy.com. I also wanted it general enough so that I wouldn’t be limited to just one surname.

Usually I blog from my desktop. However, I have released pre-written blog posts from my phone or iPad.

I send them a link. I also notify my Google + group. Eventually, I will learn Twitter.

I am most proud of my Wordless Wednesday posts—in particular, the ones that contain my mother’s artwork. I wanted to share her talent so the world could enjoy it too.

I subscribe to the ones I like and read them whenever I have a chance, even on my phone.

More ways to jazz up the page—fonts, etc.

I compose them in Word and then drop them into Blogger.

17.         Do you have any blogs that are not genealogy related? If you wish please share their titles and URLs.

I also have a travel blog called Touring the Beautiful USA (www.touringthebeautifulusa.com)

I have found Susan Gunelius’ Blogging Guide at about.com to be very helpful.

Try to release at least two posts a week, and don’t get discouraged if it takes some time to build up your readership.  Also, speak from the heart. Don’t just recite names and dates.
Posted by The Art of Genealogy at 7:19 PM 1 comment:

Email ThisBlogThis!Share to TwitterShare to FacebookShare to Pinterest
Labels: blogging 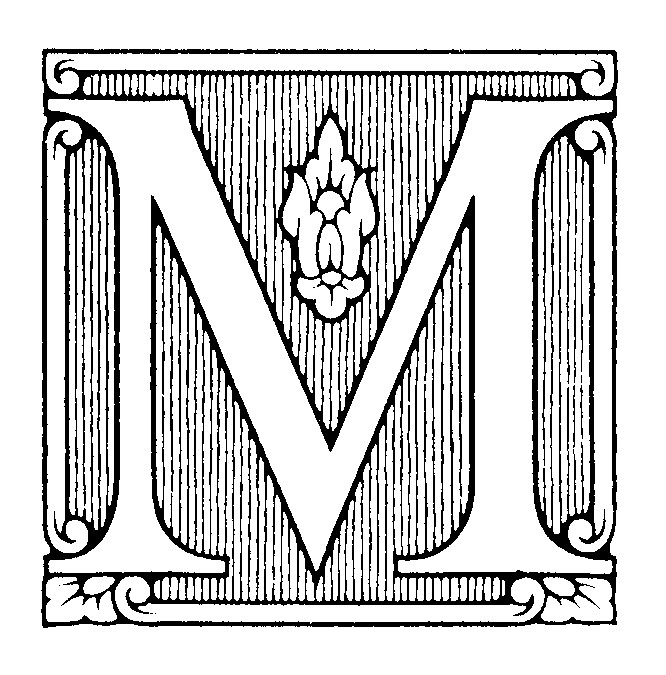 ost of us usually don’t have the luxury of frequenting courthouses or archives to do research.  We are busy working or raising children. That is why online research is so useful.  After a long day at work, we can hop on the Internet to research our family tree. I am not underestimating the importance of on-site research, but for our day-in, day-out world, online research fits our schedule.

I have compiled a list of some of the websites I visit on a frequent basis. First is a list of free websites and that is followed by some of my subscription sites. There are many more, of course, but perhaps you will find one on my list you haven’t explored.

Have a wonderful Labor Day and remember, in the year ahead, that just because you have to work it does not mean you can’t squeeze in a little time for genealogy.

Posted by The Art of Genealogy at 5:14 PM No comments: