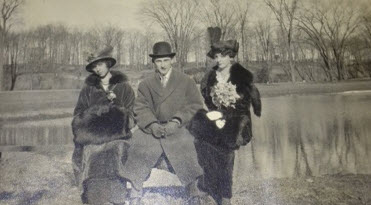 This photograph is from an album that was originally in the home of my grand aunt, Winifred WILLIAMS Boyser, in Utica, New York. I don't know for certain the identity of the people in this photograph, but I can hazard a guess based on the date (April 4, 1915) that was written on the picture. Winifred was born in 1898, so she could be one of the ladies in the shot. My grand aunt, Isabel WILLIAMS Hamlin, was born in 1894, so she could be the other woman. Winifred was shorter, so I think she could be the one of the left. The setting is probably somewhere in Oneida County, New York.

April 4, 1915 was a Sunday, so perhaps this was taken after church.

I love the big muffs that the ladies are holding.
Posted by The Art of Genealogy at 6:33 AM