Do you see the cameo that Winifred is wearing?  Her jewelry was passed down to me, and I now own several cameos. Some are on stickpins, others are dangling from necklaces, and still others are in the form of a brooch. My favorite cameo is one of a woman wearing a cameo, a sort of cameo within a cameo!

After many a magnifying-glass look, I believe that the following cameo is the one my grand aunt is wearing: 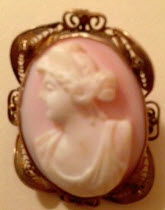 Cameos have been fashionable throughout history.  Here are some websites that discuss cameos:
If you type "cameo brooch" into Google Images, you will be dazzled by all the varieties.

Do you have photographs of your ancestors wearing jewelry that you now possess?

Posted by The Art of Genealogy at 7:08 AM

Email ThisBlogThis!Share to TwitterShare to FacebookShare to Pinterest
Labels: Jewelry