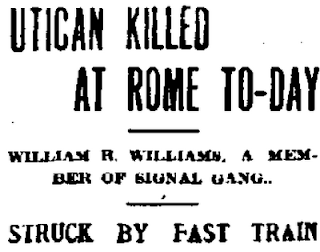 A few posts ago I wrote about my great grand uncle Richard Williams drowning in the Erie Canal in 1894. Well, flash forward one generation and now I have WILLIAM R. WILLIAMS, my grand uncle, struck by a train in Rome, New York, while working as an electrician on the railroad in 1907. Poor William was only 25 years old, not yet married, with no children to carry on his name.  I recently wrote to the Bureau of Vital Statistics in Rome, New York, for a copy of the death record and here it is:

The one thing on this record that surprised me was that it states that William was buried in a cemetery in Rome.  I had always assumed that he was transported back to New York Mills to be buried with all the rest of the Williams family. Also, his name is listed on a stone in Glenside Cemetery in New York Mills. Perhaps that was just a memorial, or perhaps the death record is incorrect. I will browse through the Rome cemetery listings online to see if I find him; he’s not on findagrave.com.  I will contact Glenside Cemetery too and see if William was actually buried there. I may never know the true place where his body was buried.  It is hard to be completely certain of the truth in genealogy. Time goes by, records are destroyed, memories fade. We are given clues, but one never knows when another tidbit of information will throw you a curveball. 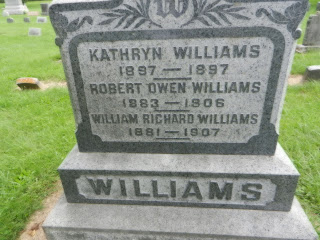 If you look at the gravestone above you will see that William's brother died the year before in 1906. Now all the sons were gone from this family. I can only imagine the utter despair of William’s parents, sisters and close friends. My grandmother was one of the sisters. It makes you wonder how people carry on after the grief they have lived through
____________________

Posted by The Art of Genealogy at 7:47 PM