RICHARD WILLIAMS AND THE ERIE CANAL

When I was eight I almost drowned in the Eric Canal. I had been playing with a friend near the Canal and I accidentally fell in. The water engulfed me in a frightening darkness. But, as you can see, I survived—not so for my great grand uncle RICHARD WILLIAMS, who drowned in the Erie Canal in Utica, New York, in October of 1894.

(Do you know that if you put the exact search terms “drowned in the canal” into www.fultonhistory.com you get 5000 hits?  Who knew that canals were so dangerous.  Children need to listen to their mothers and stay away from canals.)

Anyway, poor Richard, age 36, got all dressed up one night in New York Mills and went to downtown Utica. He was last seen on Genesee Street and then all trace of him was lost until he was discovered floating in the canal. 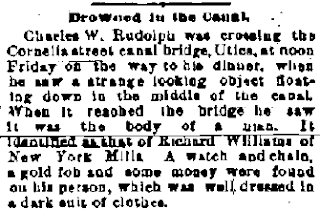 Notice the part about the watch and chain.  I inherited a watch and chain from my mom’s Welsh side of the family. I wonder if it is the same watch? Hmmm.

There was a Coroner's inquest. I need to explore how I will get those papers. Will they still be available 118 years later? Has anyone out there obtained inquest papers?  I will start with the Oneida County courthouse and will let you know my progress in a future post. I also need to see if I can obtain a copy of Richard's death certificate. 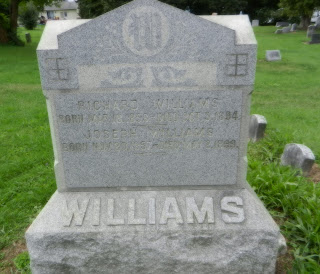 When the Erie Canal was not busy drowning people, it was actually pretty good for commerce and instrumental in the migration of our ancestors.  Here are some sources that will give you more information: