My grand aunt ISABEL WILLIAMS HAMLIN and her husband Earl Hamlin owned the Littlecote Hobby Shop in Utica, New York, during the mid-1900s.  I used to love learning about the stamps and coins when I was young. In fact, I still have the stamp book I used to fill with stamps using the little hinges my Aunt Belle showed me how to use.

During my recent visit to the Allen County Public Library in Ft. Wayne, Indiana, I decided to consult the City Directories for Utica, New York, to see what they said about the Littlecote Hobby Shop.

Beginning in 1939, Steber's Utica City Directory listed Lee Jeffreys as President of the Little Cote Stamp Shop Inc., 249 Genesee. (1) Lee Jeffreys happens to be the father–in-law of my aunt PAULINA TAYLOR JEFFREYS.  W. Earl Hamlin is listed as the secretary-treasurer.  This is an interesting bit of news since Jeffreys was on the Taylor side of my family and W Earl Hamlin was on the Williams’ side.

In the Steber’s Utica City Directory 1940-41, the hobby shop’s name had changed to the Littlecote Hobby Shop and the only name listed is W. Earl Hamlin.  Okay, there must have been a sale and a name change. Good information. According to the directory, the Littlecote Hobby Shop sold "collectors items, hobbycraft, stamps and coins." (2) This information stays the same in the 1941-1942 and the 1942-1943 directories. 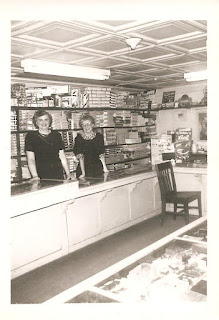 So what have I learned by examining city directories?  I learned that the Hamlins apparently purchased the hobby shop from someone who was connected to my family.  I discovered that there was a name change around 1940. If I want to try and obtain business records, I now have an approximate date to work with. I saw how the advertisements in the City Directory tracked the lives and deaths of my aunt and uncle.  I also have the approximate date when my aunt sold the store.