On my recent trip to Boston I allocated three hours of my vacation to explore the famous New England Historic Genealogical Society.  That was not nearly enough time but, unfortunately, my vacation landed on two of the days when they are closed—Sunday and Monday. 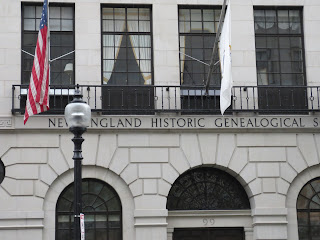 I picked my hotel (The Back Bay Hotel) specifically because it is one of the closest to the NEHGS.  At 9 a.m. sharp on Saturday I arrived at the great door of the Society.  A woman arrived and let me and a man from Vermont inside.  I was in awe, almost trembling with excitement. (This genealogy thing really is scary.) I signed in at the desk. Members can research for free; visitors have to pay $15 for the day.  Nearby, I spotted the bookstore so I could not resist. I quickly found two books of interest:


I paid for these at the main desk and received a 10% discount because they are published by the NEHGS.

Before my visit, I had printed out a list of the books and manuscripts I wanted to review.  The lady in charge told me to go to Floor Five, which houses the local history collections. I took the elevator and grabbed a table.  The adrenaline was pumping.  The shelves were clearly marked, and I spotted the Tennessee section right away.  One of the books I wanted to review was Perry County, Tennessee: History and Families 1820-1995 (Perry County, Tennessee: Perry County Historical Society, 1994). This book turned out to be a goldmine of information for my Horner line with a bit of information on my Brashear side.

In all my cleverness, I had brought along my new Flip-Pal and extra batteries.  I did a few scans and then got a Battery Exhausted message. But, fear not, I had brought extra batteries.  I popped in two new batteries but I continued to get a Battery Exhausted message.  Not to worry. I had a backup. I turned to my digital camera, which I used extensively.  In addition, I purchased a copy card on the Sixth Floor for reproducing extra special items—copies are 25 cents each.  (I later learned back in Michigan that the Flip-Pal requires four batteries. Note to self:  Know your equipment better before you venture out on a research trip.)

On my list of must-see items were two manuscripts—(1) Records of the First Congregational Church of Westmoreland, Oneida County, New York and (2) Cemetery Inscriptions from Brookfield and South Brookfield, Madison Co., NY,  by Harry Emmett Bolton. I asked the gentlemen seated at the main desk on Floor Five how to obtain manuscripts. He said that I needed to complete a form for each one and that he would retrieve them for me. However, he continued, you are only allowed to examine one manuscript at a time and if I wanted photocopies, he must make them. He added that digital photography was allowed.  I carefully examined each manuscript, but I found no people from my family tree.  It was a learning experience.

I continued my research on Floor Five by exploring the very large New York history section.  I gathered the books I had on my list as well as many others. I scanned the pages for relevant information on my family while keeping an eye on the clock. After reviewing books, you are to place them on a cart; the NEHGS does not want you to put them back on the shelves.  These are the rules and I respect them, having worked in libraries often during my lifetime.

A few surprises for me among the random books I gathered:  I found the marriage date for one of my Taylor ancestors in Index of Marriages from Buffalo Newspapers 1811-1884 (Apollo, PA: Closson Press, 1999) and I found a marvelous book entitled Guide to Historical Resources in Oneida County, New York Repositories (Ithaca, New York: New York Historical Resources Center, 1983).

As the morning started to fade away, I noticed that the tables were filling all around me and that there were genealogists helping patrons with their family histories.

At last the bell tolled (it was noon) and I had to leave. I made one last quick stop at the bookstore and bought:
CINDERELLA


I realized as I rushed out that I had missed a few floors, but I was like Cinderella with a deadline. In summary, I loved every minute of my visit. Unfortunately, I don’t live in Massachusetts and visiting Boston frequently could quickly cost an arm and a leg.  Instead, I plan to utilize the services of the NEHGS experts from afar.  And maybe, just maybe, I’ll plan another trip to Boston next year. 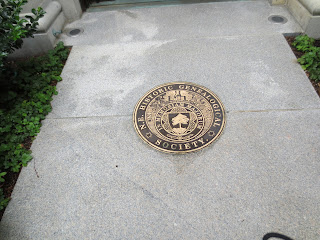 Posted by The Art of Genealogy at 7:02 PM