My husband is a patient man. We just returned from a vacation in Boston where I managed to drag him through three cemeteries:  Central Burying Ground, King’s Chapel Burying Ground and the Granary Burying Ground.  These cemeteries are filled with famous people (Samuel Adams, John Hancock, Paul Revere and more), but what enthralled me was the “art” on the gravestones. Walking among the tombstones was like browsing through a great museum.  The stones largely reflect the Puritan symbolism as the religion progressed through time.  In the late 1600s, the stones had winged skull death heads symbolizing physical death.(1) 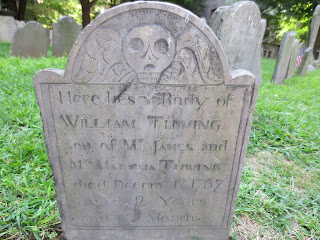 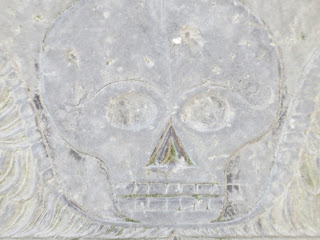 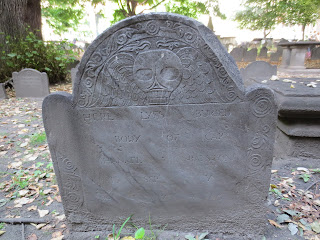 The winged cherub or angel head arrived on tombstones in the 1700s. This symbolized man’s immortal side, but it suggested life rather than death, and the joy of resurrection.(2) 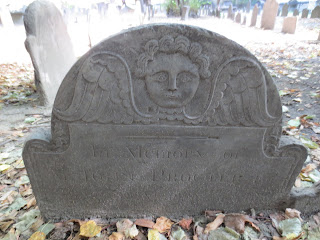 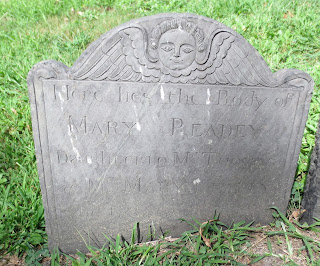 In the early 1800s, the urn and the willow became popular themes. The urn symbolizes the remains of human life; the willow represents the mourning over the loss of earthly life and the joy of celestial life. (3)

Urn and the Willow 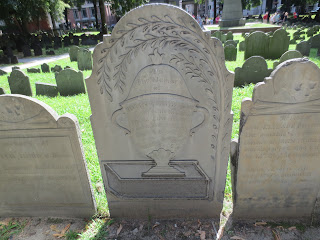 If you want to read more about early New England burial grounds or if you have ancestors buried there, you might want to check out these books:
Along with history and informative stories, these books contain maps of the cemeteries and the names of known people who are buried there. My Cutler line came into what is now Boston in the early 1600s. I noticed that there are Cutlers buried in a few of these cemeteries, so now I need to see if and where they belong on my family tree.

The following links will provide you with some good information on gravestone symbolism:


And, finally, here is my favorite gravestone from my trip.  I see a man’s face with piercing eyes, a long nose and a white beard. My husband sees a cross. What do you see? 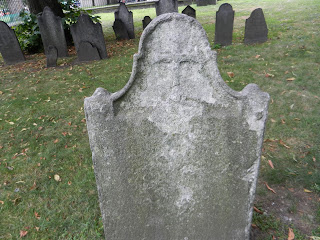